Dear Friends, Neighbors, Clients and bike enthusiasts from across our fair city,

This year marks a very special one for Reckless Bike Stores, and as the weather turns warm I wanted to welcome you all to join us in the celebration.

30 years ago this season I signed the very first lease on our first store location here on Fir Street. It’s been a wild ride to say the least, and we’re excited to share in this milestone with our extended community. The temptation to wax philosophical in this missive was too great to leave it as but one letter, so I’ve elected to write this in two parts. If you’ve read this already, you can skip to Part II here.

Back in 1986, most of my friends and family thought I was mad to open an independent bike shop. In those days the competitive threats didn’t come from online bike stores or even big box stores, but the well-known established bike shops that were sure to crush us like a paper cup.

I seem to recall someone even suggesting that it was “reckless” on my part to entertain the idea.

“Mom: He was very sickly until he started riding around on that bicycle.

Dad: Yeah… well… now his body’s fine, but his mind is gone.”

However reckless it was, we did survive, and ultimately thrive and it’s all thanks to this fantastic community and our mutual love for the greatest vehicle ever invented. Coming into a milestone has a way of putting everything in focus, and this is partly the reason for this post and email (depending where you’re reading this).

This year is for me as much about celebrating our achievements as it is giving back to the community that has supported us all these years. This all starts with the Vancouver bike community and some of the fantastic organizations that nurture and support it. To that end, we’re joining forces with a number of Vancouver community organizations, bike supporters and advocates including HUB Cycling, Velopalooza, the Cargo Bike championship and many more. 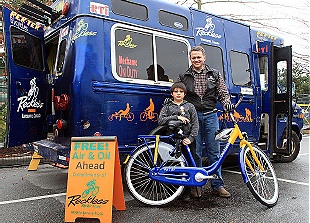 We’re also pleased to announce that this year we will be launching the first official Reckless Bike Stores Blog featuring weekly articles from designate writers on our team including store manager Melody Chan, lead mechanic Jason St-Germain and myself.

In Part II of this letter and post we’ll share some more detail about the blog and some of the exciting initiatives we’ll be taking part in this year. In the meantime, I look forward to hearing from you and seeing you out on the fine paths and trails we call our own.

My best regards, and do stay tuned for Part II.

Paul Dragan, AKA, “The Big Wheel”